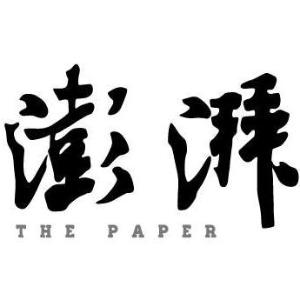 The neglected "death barbed wire" in the Australian fire

For people in the town of Bartlow, New South Wales, Australia, the road back to the town is like hell—

The pungent smell permeated the yellow sky. On both sides of the road, a scorched sheep and herd carcass appeared in front of them. They stood on top of each other, staggered and stacked near the fence surrounded by barbed wire. These poor animals tried to break the fence and escaped a few hours ago.

ABC photographer Matt Roberts tweeted: "It's too painful to drive into Batlow this morning. Never seen such a scene." Matt Roberts uploaded on On a video on Facebook, he saw a large number of animal carcasses on both sides of the road leading to Bartoma. Most of these bodies were piled near highway fences. video

According to the British Broadcasting Corporation (BBC), Chris Dickman, a professor of ecology at the University of Sydney, has analysed that there have been approximately 480 million birds, mammals and creepers since the fire broke out in New South Wales in September Animals are killed, and the actual number of victims may be much higher. In addition, according to a report published by local Australian media 7News, farmers in southeastern New South Wales have lost about 2,800 livestock in the bushfires since December 25, 2019.

On January 3rd, photographer Brad Fleet also took a heartbreaking scene-a young black kangaroo trapped on the border of a Cleland Conservation Park in Adelaide Hills Inside the fence, it was dead, and two charred forepaws hung weakly on the barbed wire, and the scene was desperate. Adelaide Hills is located in the eastern suburbs of Adelaide, the capital of South Australia. It is about 10 kilometers away from the city of Adelaide. The ecological environment is intact and there are a lot of rare wild animals. It is a local A popular tourist attraction for student groups and overseas tourists.

@Deazelle, a netizen with an ID labeled environmentalist, commented: "The photo shows two horrible things: the fire and the barbed wire. The barbed wire killed many innocent animals. If not trapped by the barbed wire, this young child The cub may have been able to escape. "

The time goes back to November 2018. A mountain fire broke out in Paradise Town, Butte County, northern California, the United States. This is the most destructive fire in the history of California. It spread from the beautiful Butte County, California. Over 150,000 acres have been burned, and Paradise, a town of only 27,000 people, has almost been burned to ruins.

In the fire, many animals were equally difficult to escape.

According to the British "Daily Mail" website reported on November 14, 2018, after receiving the evacuation request, people fled to a safe area, but many animals were abandoned in the disaster area. For example, the Malibu wine estate abandoned giraffes raised on the ranch and allowed them to survive on fire. Photos show that the giraffe was trapped in a fence and the land a few meters away had been burned by the fire.

Humans seem to be able to survive the disaster with effective organization, alert minds, and sensitive limbs. However, for those animals trapped behind the fence, even with legs that can run, the relentless barbed wire may still be a prisoner of death .

The Australian fire was raging, and a kangaroo collapsed in front of the fence and spit blood. Matt Roberts Facebook Graph

In human history, fences have evolved from simple wood or stone to metal and barbed wire structures that are becoming increasingly difficult to penetrate today. Fences have also played a vital role in protecting endangered species, preventing the spread of disease, limiting overgrazing, poaching, protecting public safety, and individuals as public resources.

However, in fact, even fences that exist to protect species can have some negative effects on wildlife.

Utah State University researchers Harrington and Conover inspected barbed wire fences on highways in Colorado and Utah from June 2004 to June 2005. They found that the presence of the barbed wire was linked to local pronghorn, roe and elk mortality.

In a report titled "Characteristics of Ungulate Behavior and Mortality Associated with Wire Fences," they wrote that the possibility of juvenile animals dying on the fence is 8 times that of adult animals. And among all the fences, the most deadly type is a woven barbed wire fence with a single band of iron wire wound on the top, and the animal's hind legs are easily caught between the two wires on the top.

Studies have found that on highways in Colorado and Utah, a dead antelope, roe or elk is found every 2.5 miles of barbed wire, not to mention that owls and eagles may be linked to fences when hunting in open areas. hit. The study also found that pregnant and winter-affected wild animals can also easily die from fences, and fences along the road can cause wild animals to be scared by vehicles and so on.

"Fences can affect wild animal behavior. They frantically want to cross the fence, or look for an exit, causing a dramatic increase in stress and energy consumption, a decline in individual health, and even being directly entangled to death by wire mesh." 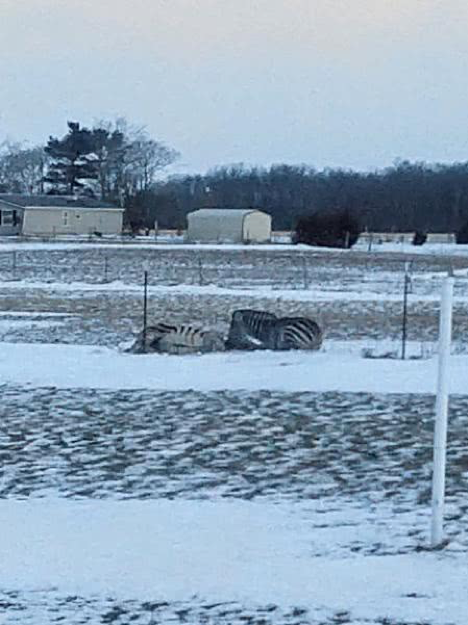 A zebra froze to death in an extremely cold field outside a farm in Indiana, U.S., because its heel was stuck in a fence.

Dr Rosie Woodroffe of the London Institute of Zoology and his colleagues and the New York Wildlife Conservation Society have pointed out in a study that shows that large fences can cause ecological collapse. Although fences can bring conservation concerns, Benefits, but it can also cause a lot of damage.

"In some parts of the world, fences are part of the protection of wildlife culture, and fences built to reduce conflicts between humans and wildlife have been successful in some places," said Rosie Woodrov. In fact, the fence has profoundly changed the ecosystem and may cause some species to disappear.

In addition to this, problems with fence design, location, construction, and maintenance do not always allow it to achieve the desired results. What is even more ironic is that in some places, poachers took materials locally and used the wire of the fence to make hunting and catching nets.

In 2011, the University of Texas at Austin studied and analyzed the animals that lived near the U.S.-Mexico border fence, and they found that the border fence poses a serious threat to wildlife populations.

Researcher Jesse Lasky said: "These fences extend a lot across the landscape area, and when animals' range of activity is separated by obstacles, including border fences and roads, their movements Limited capacity. In this way, isolated populations are vulnerable to unforeseen disasters, such as hurricanes or fires. These disasters can sweep entire populations. "

In fact, such a disaster has already occurred. 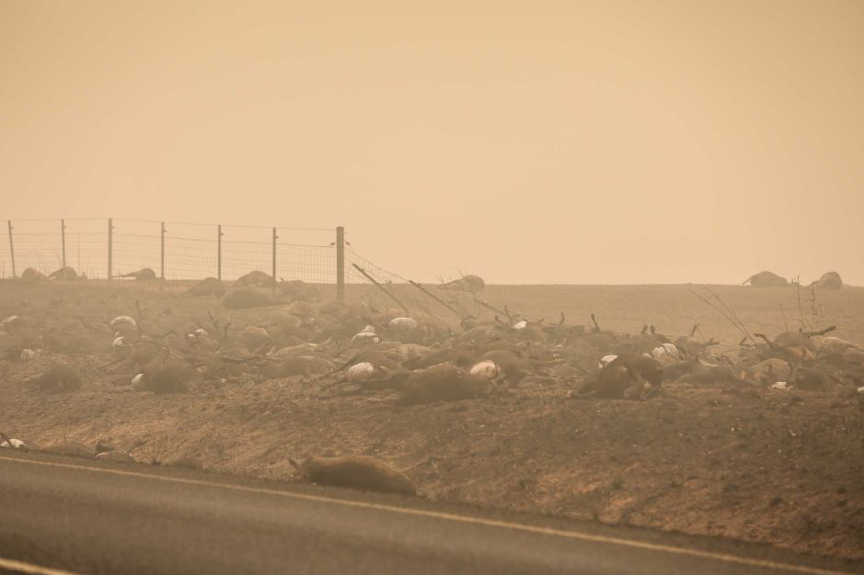 A large number of animal carcasses were stacked along the road leading to Batlow. Matt Roberts Facebookl Illustration

The advantages and disadvantages of fences for wildlife protection have been the focus of discussion between biologists and environmentalists. Some researchers have also suggested using fences that are more user-friendly or designed to reduce the pain and injury of trapped animals.

The International Wildlife Conservation Society (WCS) said: "There are many alternatives to mitigate human-wildlife conflict today, such as through better livestock management, community-based crop protection, insurance and wildlife sensitive land planning. and many more."

He noted that projects by the International Wildlife Conservation Society (WCS) in collaboration with local people and government agencies show that in different countries, such as Indonesia and Tanzania, the use of fences can also significantly reduce conflicts between people and elephants. 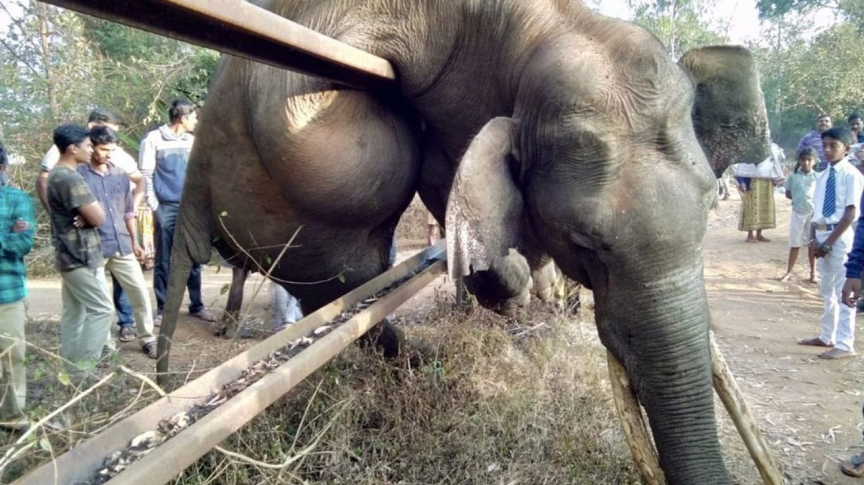 When an elephant was driven out of the village and returned to the forest in 2018, he was stuck on a 7-foot fence because he could not pass through the fence, and his respiratory organs broke and died. The incident occurred near Nagar Hory National Park in Karnataka, India. Ironically, the fence was built by the forest department to protect elephants and prevent them from entering human settlements. cntraveller.in Figure

Sarah Durant of the London Zoo Association says that if fences cannot be avoided, they can choose fences that are more friendly to wildlife, such as permeable fences that incorporate thorns or thick bushes, and allow Manage by species. For example, a rhino enclosure keeps rhinos out but allows other animals to pass. You can also take advantage of pachyderms' fear of winged insects and install beehives on the improved fence to maintain peace between humans and elephants.

Sarah Durant said, "People are increasingly aware of the damage caused by fences, leading people to take action to move fences instead of building more fences. People increasingly see fences as Step back for protection. "