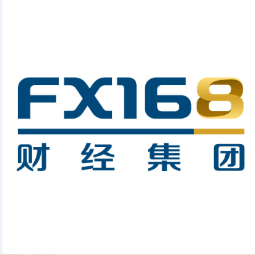 Iran's supreme leader tweeted: the attack is not enough! The market is deaf and the U.S. and US stocks fly

Original title: Iran's supreme leader tweeted: the attack is not enough! The market is deaf and the U.S. and US stocks fly

FX168 Financial News Agency (Hong Kong): On the morning of Wednesday (January 8) local time, Iran attacked two US military bases in Iraq with missiles. The Iranian Islamic Revolutionary Guard issued a statement announcing that the attack on US military bases was in revenge for the commander of the "Holy City Brigade", Sulaymani, a member of the Revolutionary Guards who had been killed by US air strikes. Iran's supreme leader, Khamenei, spoke a few hours after the attack, saying it was a "slap in the face" of the United States. He later wrote on Twitter that "such a military operation is not enough", implying further retaliation against the US for killing Iran's senior general Suleimani. However, given Iranian Foreign Minister Zarif and US President Trump's remarks on the incident, the market believes that the two sides have no intention of seeking to escalate the situation or wage war. Affected by this, the market trend reversed greatly: the US dollar index continued to climb from a daily low of 96.80, and once again rose above the 97 mark; spot gold plummeted more than US $ 40 after it soared to US $ 1610 / ounce; US stocks rose again after suffering a severe setback Potential, in which the Nasdaq once again set a record high.

Iran's supreme leader: attack is a "slap in the face" of the United States, but such a military operation is not enough

On Wednesday morning local time, Iran struck two US military bases in Iraq with ballistic missiles. Iran's supreme leader, Khamenei, spoke a few hours after the attack, saying it was a "slap in the face" of the United States.

But Khamenei later tweeted that "such a military operation is not enough", implying further retaliation against the US for killing Iran's senior general Suleimani.

An assessment of combat losses for this attack is ongoing. In the attack, more than a dozen ballistic missiles hit a base in Anbar Governorate in western Iraq and a base in Erbil in the north. Both Iraq and the United Kingdom have declared no injuries to their country, and the United States has not issued a formal statement. Assad Air Force Base was also home to the British Army and was the second largest air base in the country used by the US Army during the Iraq War.

Prior to the missile attack, Iran held three days of mourning for the assassination of the Islamic Revolutionary Guard's "Holy City Brigade" leader Suleimani. Suleimani is also behind the scenes of Iran's expansion of its influence and agent network in the Middle East. The general was revered as a hero in Iran and a terrorist in the United States. On Friday morning, he and his colleagues, as well as Iraqi Shiite militia leader Muhamdis, were killed by drones at Baghdad airport.

After Suleimani was killed, Iran vowed to "severely retaliate" against the United States. Experts warned that US military bases and energy facilities in the area were attacked by Iranian leaders, and Iran's many agents in Iraq, Lebanon, Yemen, Syria, Afghanistan and other places may launch cyber attacks and potential attacks. The fact that Iran has declared direct responsibility for launching the missiles, rather than operating through agents, surprised many regional analysts.

U.S. Department of Defense officials and the White House said Suleimani planned to launch an attack on US citizens, but the relevant information has not been seen by the public or members of Congress.

US President Trump's response to the attack has been relatively calm. He wrote on Twitter: "Everything is fine!" And "So far, everything has gone well!", Indicating that there were no casualties in the US military. Trump will brief on the incident on Thursday morning, Beijing time. 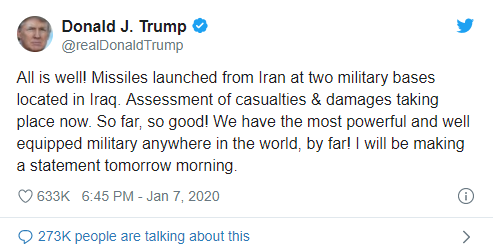 Iranian Foreign Minister Zarif also said on Twitter that Iran "takes appropriate measures" and took "self-defense" actions against the killing of Suleimani, adding that "We are not seeking escalation or war, but Will defend himself against any aggression. " 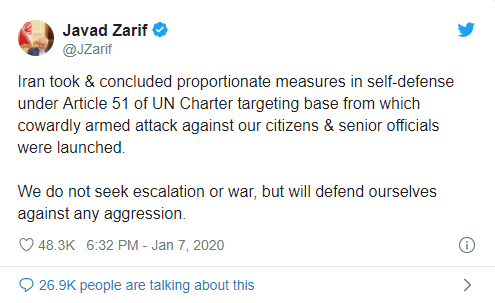 Leaders of both countries insist that they do not want a war, but the two sides' response to each other's escalating moves is pushing the two opponents to the brink of a total conflict. After the news of the missile attack, the market plummeted, the Dow Jones index plummeted 400 points, and Brent crude oil prices soared 4%.

Prior to the killing of Suleimani, Iranian-backed Shiite militiamen believed to have attacked the U.S. ambassador to Baghdad, allegedly under the guidance of Suleimani. Earlier, the United States launched an air strike that killed 25 militiamen from the Shiite group Hezbollah in Iraq in retaliation for a rocket attack on a base in Iraq at the end of December last year. The attack resulted in the killing of a US contractor.

In the growing tension between the United States and Iran, this assassination marked the most dramatic escalation and could be a historic turning point. Security experts believe that Suleimanni's death is as important as a country's elimination of the Joint Chiefs of Staff or the director of the Central Intelligence Agency.

According to the news, in the early morning of January 8, local time, Iran launched ballistic missiles to launch "retaliatory strikes" against two US military bases in Iraq. A U.S. Central Command spokesman said that at present the U.S. military has not counted any casualties. Due to the detection of missile launches in advance, the vast majority of personnel entered the bunker before the missile hit.

However, Iran ’s state-run television station claimed to have killed 80 US “terrorists” and destroyed multiple helicopters and drones. Regarding the number of U.S. military casualties caused by the Iranian attack, the United States and Iran have held their own words.

CNN cited Nic Robertson's analysis as saying that the Iranian attack might be "a smart diplomatic move." Robertson further said that Iran had warned Iraqi military commanders to stay away from U.S. bases, and U.S. officials had confirmed that their troops had received sufficient "early warning" to avoid the attack.

The Verge website reports that young Americans have begun to receive news that they are required to immediately start military service at the nearest recruiting point and to serve in Iran in the future. The military command issued an official statement saying the news was false. The statement states separately that young people who have reached the age of recruitment do not need to worry about service.

According to the analysis, both sides have found a balance between calming the national anger and deteriorating risk aversion, which is a guarantee that tensions in the Middle East will not run out of control, so investors' enthusiasm for safe-haven assets may come to an end. Right now, global investors are waiting for a statement from US President Trump.

It is reported that US President Trump will issue a statement on Iran ’s attack on the U.S. military base in Iraq at 11 am EST on the 8th (0 am Beijing time on the 9th).

During the US market on Wednesday, the US dollar rebounded and reached a maximum of 97.25, the lowest reached 96.80 during the day; the euro / dollar fell sharply, the lowest was 1.1109, approaching the 1.11 mark. 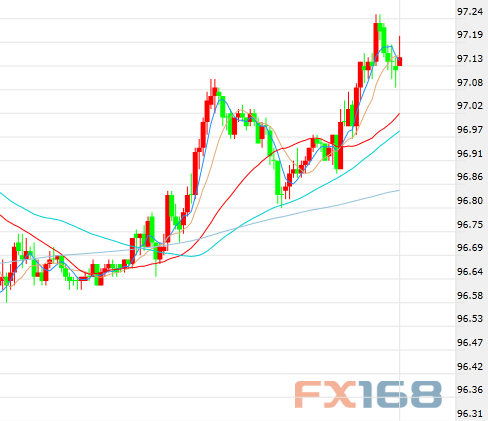 The global currency fluctuated sharply on Wednesday as initial concerns that Iran's attack on U.S. forces in Iraq could lead to more violence in the Middle East have receded, and markets have turned to a wider regional conflict as unlikely.

Adam Cole, chief foreign exchange strategist at RBC Capital Markets, said: "The news of Iran firing ballistic missiles at two bases in the US military in Iraq immediately triggered a risk sell-off." He was referring to a decline in the dollar / yen And soaring crude oil prices.

"However, more and more people believe that this will be the result of Iran's full retaliation. These two trends have completely reversed and the G10 currency has returned to yesterday's closing level."

Kit Juckes, head of foreign exchange strategy at Societe Generale in London, said: "The market believes that, right or wrong, we will not see a continued escalation in military operations."

Spot gold fell sharply after hitting a high, hitting a minimum of $ 1567.68 per ounce, plunging more than $ 40 since the day's high; oil prices also plummeted after the high, and US oil cloth oil is now all down. 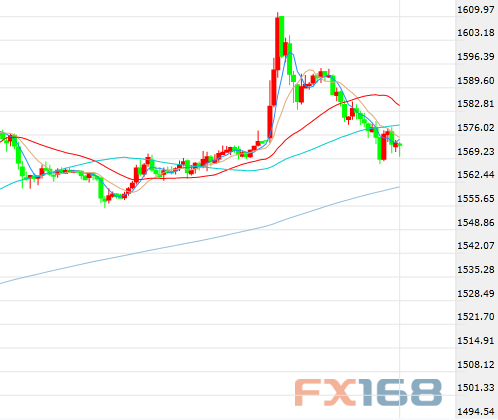 On Wednesday, after Iran's retaliatory crackdown on US forces in Iraq, the price of gold broke the US $ 1600 / ounce mark for the first time in almost seven years, but then gave up its gains and investors waited for the White House's response.

Saxo Bank analyst Ole Hansen said, "Gold prices are currently reversing some of the gains because investors believe that retaliation is not as aggressive as the market expected, and investors are profiting."

US stocks recovered from the previous plunge after Iran fired a rocket at a U.S. military base in Iraq. US stocks rose in early trading on Wednesday.

In addition to the market's worries over the tension between the United States and Iran, the latest US ADP employment data also supported US stocks.

Peter Boockvar, chief investment officer at Bleakley Consulting Group, wrote: "After the S & P futures panic fell by 50 points last night, I think the market's response this morning was rational because the market believes that these missile launches may be the end of this dispute, Rather than upgrading further. "

Trump's response to the attack was milder than traders' fears. Trump previously wrote on Twitter, "Everything is fine!"

"While tensions between the U.S. and Iran may continue, we do not expect a major and serious upgrade," said Mark Haefele, global chief investment officer at UBS Wealth Management Because neither side intends to seek a wider military conflict. "

Historical data shows that the crisis in the United States and Iran has rarely led to long-term market downturns. Barclays data shows that after three months of confrontation between the two countries, the S & P 500 index rose by an average of nearly 3%. After 6 months, this average increase will rise to 5.5%. Back to Sohu, see more