Flu ≠ common cold! These things must be paid attention to in the high flu season

Original Title: Flu ≠ Common Cold! These things must be paid attention to in the high flu season

The flu may be late, but it never seems to be absent! The coughing sounds around you are reminding you that the flu season is coming again!

More susceptible to flu in winter

We can be attacked by the flu virus all year round, but winter flu cases seem to be particularly high. Speaking of which, this is really a very complicated problem and there are many explanations in medicine.

In winter, the weather is cold and the wind is strong, people are more vulnerable to cold, which weakens the body's resistance. At this time, the virus can invade and invade our respiratory system. In winter, people stay indoors longer. To prevent the cold, often close the doors and windows, resulting in air circulation, coupled with frequent crowds and airless public places (subway, buses, etc.). The spread of influenza virus has facilitated.

The relationship between air humidity and influenza virus transmission is also a hot topic in medical research. A recent study by Yale University found that a key factor in the spread of influenza viruses in autumn and winter is low air humidity. Therefore, using humidification equipment to increase air humidity during the flu season may help people reduce flu symptoms and speed up the recovery process after infection.

Sneezing, runny nose, cough, fever ... these "cold" symptoms are very easy to "come home." But it ’s also a cold. Why do some people get cured without taking medicine, but some people have to “do something”?

This is because one is a common cold and the other is flu. The two are different diseases, and of course they cannot be confused. It's as if described in a comic: flu is the male number one in cold viruses, and common colds are run by cold viruses. Therefore, the lethality of the flu is certainly strong. 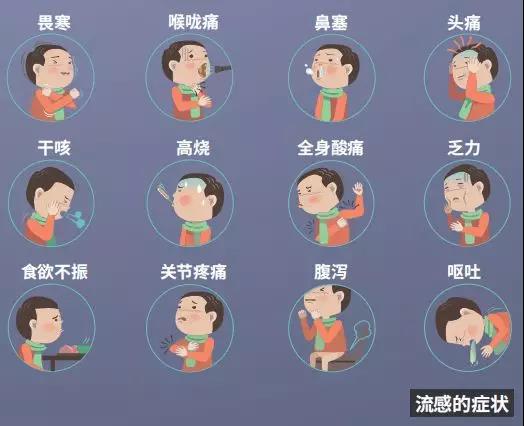 The reason why the flu and the common cold are difficult to distinguish is because these two colds are caused by viruses in the upper respiratory tract, and usually have common cold symptoms such as runny nose, sore throat, cough, and sneezing, but in fact, There is a big difference between the two.

First, the pathogens are different. The common viruses that cause common colds are rhinovirus, adenovirus, and coronavirus; the main pathogens of influenza are influenza A virus (H1N1, H3N2 subtypes, etc.), influenza B virus (which can cause seasonal epidemics), and influenza C virus (Only sporadic infections), of which influenza A virus is the most harmful and susceptible to mutation, resulting in helplessness to its "next generation", vaccine failure, and human resistance to it.

Second, the onset season is different. The seasonality of the common cold is not obvious, while the flu is obviously seasonal (mostly in October to March of the following year in northern China).

Finally, the flu is more contagious. If you have been diagnosed or suspected of having the flu, you need to isolate or take time off from home to avoid going to work or school.

Want to learn more about science and want to explore more interesting content Come and follow us Zhilijun! Back to Sohu, see more

Knowledge Network
Use small knowledge to increase wisdom, build a knowledge circle, and build a source of strength